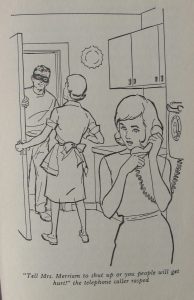 In Nancy Drew Mystery Stories, there’s rarely any doubt about who the criminals are. Oh, sure, sometimes masks are involved. But even when they’re not, the criminals are still easy to spot from a mile away. Just look at how author Carolyn Keene describes the villains upon the first meeting in the very first book, The Secret of the Old Clock:

“They were short and heavy-set. One had dark hair, the other light. They had kind of large noses.”

Yes, the nose is a dead giveaway. But so are the eyes.

In The Clue of the Black Keys, Nancy is able to help a professor identify a suspicious character through her excellent description:

“Dark, short. Sort of a crooked mouth and beady eyes.”

And in The Haunted Showboat, Nancy gives an equally excellent description of the man who stole her car:

“He was dark and slender, with small, piercing black eyes. He had a very low forehead, and his hair looked coarse and stiff.”

These criminals obviously have no redeeming qualities. But occasionally, Nancy runs into a villain who might appear to be a cut above. But he’s not. And Nancy immediately knows that. And it usually goes back to the eyes.

In Nancy’s Mysterious Letter, Nancy is shown a picture of a very attractive suspect, but she is immune to his charm:

Edgar was handsome, but his eyes were as cold as steel and she instantly felt that he was not a person who could be trusted.

In The Whispering Statue, she quickly appraises the crooked artist Marco De Keer, whose “outstanding feature were his black eyes which glistened intensely.”

“He may be talented,” Nancy thought, “but I’ll bet he’s cruel and scheming.”

So, yes. Villains are immediately identified by their looks. But luckily, the reverse is also true. Nancy is able to find people without beady eyes who are more than willing to help her crack the case.

In The Invisible Intruder, Nancy and her chums hide in the woods to catch the bad guy who has dropped a shell into a pit. (I guess you had to be there).

The six spies remained hidden but kept their eyes on the path. A boy about sixteen years old was coming in their direction. He was nice looking and well dressed.

“Surely he isn’t the person we’re searching for,” Nancy told herself.

Well, actually, he was. Kind of. He was not the real bad guy, just a kid who was tricked into working for the bad guy. A local youth described him this way:

So, despite his attractiveness, he is a little bit bad. But only a little.

And at least he didn’t have a large nose.