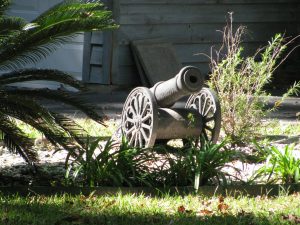 As far as I know, the Redcoats never invaded my neighborhood. The Yankees didn’t, either.

I guess they didn’t think our yard flags and patio furniture were valuable enough targets. But if they ever do come back for our plastic flamingos, at least one neighbor is ready.

I know what you’re thinking. What if he runs out of cannonballs for that cannon?! They can’t be easy to come by nowadays. Well, fear not. The local garden center sells cannonballs. 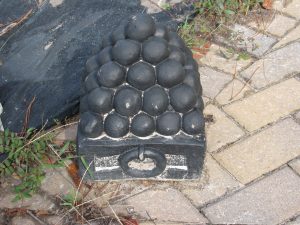 Last year, just before a thousand-year flood struck the neighborhood and did more damage than General Sherman could ever imagine doing, there was news about Civil War cannons being raised from South Carolina’s Pee Dee River. For 150 years, the cannons were buried in the river bottom, which served as a “protective cocoon.” Not only were the cannons in exactly the same spot where they were jettisoned, but they were in “fabulous” shape.

I can believe that.

After our thousand-year flood, when heavy cars and dumpsters floated away, the cannonballs at the garden center were in exactly the same spot. I don’t think they budged an inch.

Edited on 10/10/16 to add: SC has just come through Hurricane Matthew, and one of the more interesting stories to emerge in the aftermath was the unearthing of Civil War cannonballs on Folly Beach. I told you those things were hardy. I’m thinking we should build all our coastal structures out of them.

If only they didn’t have the propensity to explode.