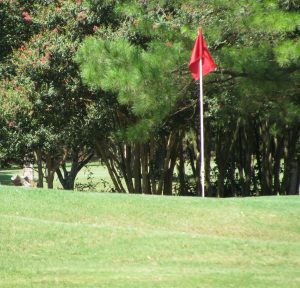 Too bad it wasn’t part of the 1936 Olympics. Nancy Drew would have been a shoo-in for the team, as evidenced by her performance in a hotel golf tournament in the 1937 edition of The Haunted Bridge.

Nancy manages to win the tournament despite an injured wrist, accusations of cheating and the unwanted attention of Mortimer Bartescue.

Ah, yes, Mortimer Bartescue. That name has stuck in my brain ever since I read this book as a child. He is a braggart, he cheats at golf and, even more concerning to Nancy…

She rather distrusted his claim that he came from an excellent family.

Well, that will be cleared up easily enough when Ned looks for Mortimer in the Social Register.

Let’s get back to the golf tournament where, according to the tournament chairman, the competition has never been as keen as it is this year. Some of the best women golfers in the state are entering the tournament.

Naturally, Nancy easily qualifies. Then she wins her preliminary rounds and makes it into the final round against Miss Howard.

Nancy played “home” in true championship style, every shot straight and true. Miss Howard, in a desperate attempt to win, tried too hard and set her ball into a sandtrap. This cost her an extra point. Nancy’s ball already rested on the green scarcely three yards from the cup.

She putted with ease and confidence. The ball rolled so swiftly that a little gasp of horror went up from the crowd. Many persons thought that it would end at the far side of the green. But the ball had been struck squarely and the aim was perfect. It dropped with a little thump into the hole.

Sounds like the perfect Nancy Drew ending to a tournament, doesn’t it? Well, not quite yet! Everyone cheers, of course, and George proudly tells Nancy that she has won the tournament with a score of 87.

“It sets a new record for women here at the Deer Mountain course. And you were the youngest one in the tournament, too!”

Now THAT is a perfect Nancy Drew ending.

Oh, and what about that pest Mortimer Bartescue?

“Did you look to see if his name appears in the Social Register?”

“I looked for it but it wasn’t there. I imagine the fellow is just a windbag.”

“I’ve suspected it all along, Ned.”