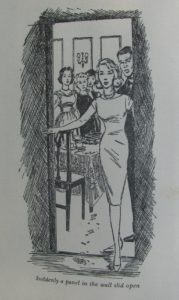 “Suddenly a panel in the wall slid open”

Everyone watched in amazement as the titian-blond girl began to tap the wall, then listen intently.

Nancy motioned them not to say a word. She continued tapping until she tried one spot which sounded different. It had a hollow ring. Nancy pressed against the wooden wall. Suddenly a panel slid aside noiselessly.

John and the others gaped in astonishment as the panel in the wall slid open. “Nancy, you’re terrific!” John exclaimed, handing her his flashlight.

Everyone crowded behind Nancy, as she beamed the light into a wood-walled closet. (Mystery at Lilac Inn)

See! There was reason for me to think that there might be a panel in the back of my closet that would open into the back of my parents’ closet. Even though it would have been awfully hard to push all the coat hangers aside. Or move the chest of drawers. But even Nancy Drew ran into cluttered closets at times.

Together, the two girls stuck their fingers into the tiny opening and shoved with all their might. The panel began to give, but it squeaked and groaned loudly.

“Spooky!” George remarked, as the girls squeezed through the narrow opening. Nancy and George found themselves in a large closet filled with dishes. (Hidden Window Mystery)

Sliding doors aren’t the only types of secret panels Nancy Drew found. In fact, my favorite panels were the ones in The Sign of the Twisted Candles, marked by — you guessed it — twisted candles. They were in desks, above the fireplace, and on bedroom walls.

She pushed it hard and the panel with the carved candle dropped into her hand. At the rear of the opening was a latch. Quickly she lifted it and a door swung open.

To her surprise a music box inside began to play. Now she could see that it was a highly ornate — and, she guessed, priceless old piece. (Sign of the Twisted Candles)

My childhood home did have paneling surrounding the fireplace. So, yes, that was another wall that I spent much time tapping and pushing and prodding, looking for a small cubby hole with a priceless treasure inside.

And then there was the wooden furniture that I thought might have a secret drawer, like the round wooden table in the corner of the living room. Hey, it could happen.

The other girls helped her pull out the drawers and set them on top of the workbench. Each was examined thoroughly. Nancy noticed that the bottom of one was thicker than that of the others.

“Maybe this means something,” she said.

Again using the file, she managed to pry up part of the wooden bottom and found that there was another beneath it. Between the two pieces of wood lay a matching salad fork and spoon. (Clue of the Crossword Cipher)

I had no such luck finding hidden panels. (Or matching salad forks and spoons.) But Nancy and her chums often found more than one hidden panel in the same book, with passageways and tunnels running in between.

“The little house does have a secret panel,” Nancy entered the conversation. “I found it only a minute ago.”

“You did?” Mrs. Chatham asked in astonishment. “Where is it located?”

“I’ll show you. But first I wish George would point out the hidden door.”

…George had no difficulty in locating the concealed door which served as a secret entrance and exit to the studio. Nancy pushed against the wall and stepped through the narrow opening.

“This passageway must lead along the back wall to a tiny room behind the piano,” she called, her voice muffled. (Quest of the Missing Map)

See! There ARE secret rooms behind pianos.

Oh, well. Maybe it’s lucky for me that I never found a hidden panel. As Nancy showed us, over and over, they can be quite dangerous.

The rear wall was formed of two very wide wooden planks. In the center was a round knob, sunk in the wood.

“This is strange” Nancy remarked excitedly.

She pulled on the knob but the wall did not move. Next, she pushed the knob down hard, leaning her full weight against the panel.

Suddenly the wall pushed inward. Nancy lost her balance and disappeared into a gaping hole below! (The Hidden Staircase)

And just think. If you can go through a panel in one direction, somebody else could always come through from the opposite side.

Mrs. Wendell sighed. “You go along inside. The trunk is in the closet.”

Nancy entered the small one-windowed room…A washbasin sat on a flimsy wooden stand under a mirror next to a closet door. She walked across the room and opened the door.

A man was just stepping through an opening in the rear of the closet!

Quick as a flash he stepped back. A panel slid across the space and a lock clicked into place. (The Leaning Chimney)

Of course, when it comes to danger, a picture is worth a thousand words. So here are 3,000 words.