It’s Valentine’s Day. So I’m sure all of us Nancy Drew fans are thinking the same thing…

Why? Because that book could have easily gone by the title “The Legend of Dirk Valentine.”

You haven’t heard the legend? Well, let me tell you… 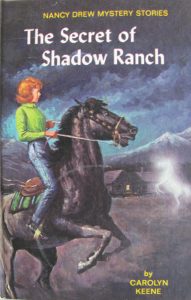 Dirk Valentine was the sweetheart of Frances Humber, whose family originally owned Shadow Ranch. Now, here’s the rub. Dirk was an outlaw, and Frances’ father was the local sheriff. Knowing that his days were numbered, Dirk hid his fortune and tried to get word to Frances to tell her where it was. But then a most unfortunate thing happened. Her father shot and killed Dirk.

OK, let me stop for a minute here to tell you that Shadow Ranch was always one of my favorite Nancy Drew Mystery Stories. For a child growing up in the suburbs, this book was an exciting escape to a world of rattlesnakes, deserts, rodeos and Indian cliff dwellings. The story held so much adventure, almost every chapter ended with an exclamation point.

The story begins with Nancy joining her chums for an exciting vacation at Shadow Ranch. But the girls quickly get more excitement than they bargain for when a phantom horse appears.

“As he lay dying, the desperado put a curse on the Humber property, vowing that his horse would haunt Shadow Ranch. And whenever it appeared, destruction would follow.”

Why send a horse to do a man’s job? And for that matter, was his horse even dead?

If the horse wasn’t dead, then how could Dirk guarantee that it would come back as a phantom when it did die? And if it was already dead, well, how could he guarantee it even then? Can you force a dead horse to come back as a ghost if he doesn’t want to?

I didn’t think of these things when I was seven.