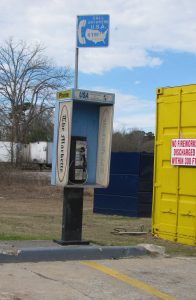 My daughters will never know a world without cell phones. Or without the neighborhood cell phone tower.

It would amaze them to know that Nancy Drew not only managed to survive, but actually thrive, in a world without cell phones. So how did she do that? And what in the world did she take selfies with?

Well, Nancy doesn’t seem like a selfie kind of gal. So I can’t answer that question. But as to how she got by before cell phones, well, once upon a time there were things called landlines. But of course, they weren’t called that then. They were just called telephones. Imagine that!

Nancy’s world isn’t as foreign to me as it is to my children. When I was growing up, every kitchen had a telephone. And get this — it was hanging on the wall! Just like in this scene from The Whispering Statue:

Hannah made her way to the backdoor, while Nancy answered the wall telephone in the kitchen. A harsh voice on the other end of the line asked, “Drew residence?”

“Yes. Whom do you want?” Nancy queried.

The caller rasped, “You tell Mrs. Merriam to shut up or she’ll get hurt and you people too!” The caller slammed down the instrument.

By this time Hannah had opened the back door. To her amazement a burly masked man stepped inside and knocked her to the floor.

Of course, kitchens weren’t the only places you could find a phone. Slightly before my time, homes were often constructed with little nooks in the hallways for telephones.

Oh, and I guess for flowers, too, as we discover in The Secret of the Wooden Lady…

There were no signs of a struggle in the hall. The telephone was back in place and the big bowl of peonies beside it was undisturbed.

…and again in The Clue of the Dancing Puppet:

“Our phone is on a table in the lower hall,” she said. “I guess you didn’t notice it because I always keep a large bouquet of flowers there.”

Throughout the series, Nancy uses a hall phone quite frequently. Or sometimes not, as in The Mystery of the Glowing Eye.

The hall telephone rang persistently. Nancy Drew, however, sat in the living room, lost in thought.

If today’s youth got their information about hall telephones only from Nancy Drew, they might understandably be confused. From this passage in The Clue in the Diary, they might even believe that it was possible to see who was on the other end of the line. Just like Skype.

“Good morning, Nancy. A young man wishes to speak to you on the phone.”

Thrusting her feet into dainty black-and-gold slippers and snatching up her dressing robe, Nancy hurried to the hall telephone.

So, let’s suppose now that you’re not in a house, and you can’t get to a kitchen phone or a hall phone. How are you going to telephone the police? Well, there are always pay phones!

In The Whispering Statue, Nancy has no problem at all getting in touch with the police. Leaving George to guard an intruder with one of her famous judo tricks, Nancy runs to summon an officer.

She raced from the shop to a corner pay telephone a block away and called the police. Nancy explained the situation to Captain Turner. He promised to send a squad car at once.

Easy-peasy, right? So easy, in fact, she does it again in The Clue of the Dancing Puppet. And she doesn’t even have to run!

Nancy laid a restraining hand on her chum’s arm. “We have no right to make a search,” she said. “I think we should get in touch with Chief McGinnis, tell him what we’ve found out, and ask him to send a couple of detectives here to go upstairs with us.”

There was a pay phone on the wall near the front door. Nancy put in a coin and called the chief. Speaking barely above a whisper, she told him her findings, and he promised to send men over at once.

In Nancy’s world, even the police use pay phones to call the police — as we see in The Moonstone Castle Mystery:

Father and daughter sat down to enjoy the snack and to wait for a report from police headquarters. When half an hour had gone by and no message had come, Nancy asked her father if he would mind calling the police.

“You do it,” he suggested, giving a big yawn. “I admit I’d like to get some sleep. But without knowing whether or not that prowler has been captured, I doubt that I can doze off.”

Nancy hurried to the phone. The report was disappointing. Detective Donnelly had reported to headquarters from a pay phone that the prowler had abandoned his car and fled into the woods. There was no chance of finding him in the dark.

Sometimes, the pay phone is in a phone booth — like the one Nancy uses in The Mysterious Mannequin.

Nancy had just closed herself inside the glass booth when Ned noticed a car coming at a swift pace up the street. It was probably a getaway car!

Now, as far as I understand phone booths, the doors are there to add more privacy to a conversation. But apparently, we can’t always count on that, as shown by this scene from The Hidden Staircase:

As Nancy left the phone booth, a large, grayhaired woman walked up to her. “Pardon me, miss, but I couldn’t help overhearing what you said. I believe maybe I can help you.”

“I learned of it by accident. I was in a phone booth one day when I overheard a man talking in the adjoining booth. I didn’t pay any attention until I heard ‘unusual China clay,’ then ‘Masonville’ and ‘leaning chimney.’ I tried to hurry my call so I could ask him about the clay, but when I hung up, he had disappeared.”

The heyday of phone booths was pretty much over before my time. But I’ve certainly used a pay phone or two in my life. On a road trip with my children a couple of years ago, I pointed out the pay phone pictured in this post because I knew it was one of a vanishing breed. Sure enough, when we stopped at the same store a few weeks ago, the phone was long gone.

So, that begs another question. What if you’re out in the country, and there isn’t a pay phone — or any phone — around? (Which is a question that probably boggles the minds of today’s youth.) Well, you’d walk until you found a phone. (An even more mind-boggling idea!) But what if the first house you come to doesn’t have a phone? (Most mind-boggling idea yet!)

In The Mystery of the Tolling Bell, Nancy awakes from a stupor in a ditch and sets out to find help.

At length she reached a farmhouse. Seeing a well in the yard, she crossed a cinder path to draw herself a cool drink. A woman, wearing a faded gingham apron, peered curiously out the screen door.

“Goodness!” she exclaimed, coming outside. “You look all tuckered out! Have you walked far?”

Nancy hung up the long-handled dipper from which she had been drinking.

“Yes, I’ve walked a long distance,” she said quietly. “My friends and I had an accident with our boat. May I use your phone?”

“Bless you, we haven’t one. The nearest phone is at the Gladstone Dairy, half a mile down the road.”

OK, maybe I was wrong. Maybe today’s kids won’t think it’s odd that the house doesn’t have a phone, because they’ll be so stuck on pondering the well in the yard, the cinder path, and the gingham apron. Anyway, Nancy never does reach the dairy because Ned Nickerson suddenly comes speeding up in a car. Apparently, he was in the neighborhood selling insurance. And all’s well that ends well.

So, in summary, let’s see what Nancy is missing out on by not having a cell phone. Well, convenience, for one thing. And just think of all the advanced sleuthing she could have done with a GPS, a camera and a high-powered search engine.

On the other hand, today’s youth are missing something, too. In The Invisible Intruder, Nancy and her chums are left stranded in the woods, but they stride off at a fast pace to find a phone.

It was a long, hot walk to the next house. The family who lived there was seated on the lawn. They greeted the group affably and said their name was Sutton.

“You look hot,” Mrs. Sutton spoke up. “Would you like some cool drinks?”

“Thank you. That would be very welcome,” Nancy replied. “But first I’d like to use your telephone to call the police. We saw a rather peculiar incident on the road about a mile from here and we’d like to report it.”

Mrs. Sutton led Nancy into the house and showed Nancy where the telephone was. In the meantime, the woman went to the kitchen and poured six tall glasses of fruit juice and filled a plate with homemade cookies.

So there you go, young cell phone addicts. You’re missing out on the possibility of refreshments and a pleasant visit with a nice family. No cookies for you! Or fruit juice, either. Hmmpf.