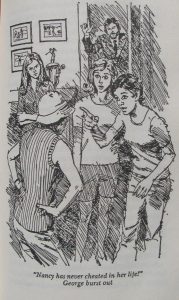 So this should be my last post about Mortimer Bartescue.

But I can’t promise. There’s just something fascinating about that man…

I wrote last week about Mortimer’s makeover between the 1937 and 1972 versions of The Haunted Bridge. And before that, I wrote about how Nancy Drew won the resort golf tournament, despite Mortimer Bartescue being such a pest.

Actually, he’s more than just a pest, isn’t he? He is a man of questionable ethics, as we first discover when he follows Nancy around during the qualifying round of the golf tournament.

Finally her ball was only five feet from the cup. Intensely annoyed, because the man was still with her and still talking, she stepped up to putt. The shot was perfectly played, but at the very edge of the hole the ball stopped.

Mortimer Bartescue immediately jumped up and down on the ground, causing the ball to drop into the cup.

“There, Miss Drew! Your five.”

“That really wasn’t fair,” Nancy said severely. “I shall count that as an extra putt which gives me a six.”

Nancy and her chums smiled coldly, and murmuring a few polite phrases, walked to the hotel, leaving the man to stare blankly after them.

Here’s what I find most interesting about that scene. Nancy won’t let Mortimer tamper with her golf score. At all. But the editors who revised the text in 1972 did just that. Just look at the differences between the two texts.

1937 version: “You’ll surely qualify, anyway,” Bess said as she studied the card. “George has a hundred and two, my score is a disgraceful hundred and twenty, but Nancy has a brilliant ninety-three!”

1972 version: “George has an eighty-five. My score is a disgraceful ninety, but, Nancy, you have a brilliant seventy-five!”

1937: “How was your score?” George inquired, taking the card from Nancy’s hand.

“Not very good. I came in just a few strokes under a hundred. I figure I must get down into the eighties at least to win the tournament.”

1972: “Not very good. I came in with an eighty. I must get down into the low seventies or under to win.”

1937: “Your score totaled 87,” George added proudly. “It sets a new record for women here at the Deer Mountain course.”

1972: “Your score today was sixty-nine,” George added proudly. “It sets a new record for women at the Deer Mountain course.”

During the tournament, an opponent has the nerve to accuse Nancy of cheating.

Bess and George had followed their chum to the golf office. Unable to remain quiet, they flew to her defense.

“Nancy has never cheated in all her life!” George insisted angrily. “You’re just provoked because she defeated you!”

“Now, let’s be calm about this,” he said anxiously. “We’ll try to decide this matter fairly—”

Well, obviously George is right. Nancy has never cheated a day in her life. We all know that.

But what about those lower scores in the revised version? Where did those come from? And why were they changed?

That’s something you should be looking into, Mr. Golf Chairman.