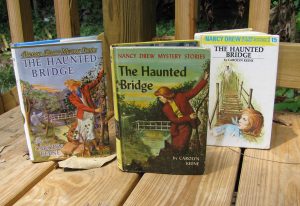 Out of the 51 Nancy Drew books I read as a child, I remember only a handful of secondary character names — and bits and pieces, at that. Except for two. There are two character names that I remember distinctly all these years later: Mehearty and Mortimer Bartescue. So imagine my dismay when I learned recently that these two had been given makeovers — and new names — in the 1970s.

In my secondhand 1937 version of The Haunted Bridge, Mortimer Bartescue was described thusly:

He was a tall, thin man in his late twenties immaculately dressed in white slacks, with his sleek black hair plastered back from an angular, hard face.

In the 70s, he was still tall, thin and rocking the white slacks. But then there is this:

Nancy tells her chums she dislikes his type, but one thing about him did capture her interest.

Bess giggled. “What was that? His ultramodern clothes?”

No, silly Bess. It’s the way he’s always trying to disguise his handwriting. And, of course, I have to point out that the passage above was from the 1972 version. The 1937 version goes like this:

“Don’t be silly, Bess. That fellow looks like one of those wax models one sees in store windows.”

I started out talking about his name. And what a name it was. Mortimer Bartescue. How could you not remember that?!

But in the 70s, he was given a much less dated name: Martin Bartescue. And apparently, that wasn’t even good enough. As I’ve already discussed, Mehearty’s makeover had a bit of silliness in it, as was common in 70s updates. And I’m afraid that Mortimer, er, Martin, suffers the same fate, when George adds a silly nickname:

But, oh, what a tangled web we weave. If you change his name from Mortimer to Martin, then you have to change other things, too. You see, in this mystery, Nancy is looking for Margaret Judson, a young woman who suddenly disappeared, leaving behind a jilted fiance named Morton. Nancy’s search for Margaret leads her to an old gardener named Mr. Haley, who accidently shoots himself, and Ned and his friends stay with him during his recovery. Nancy asks Ned to write down everything Mr. Haley says in his delirium. In the 1937 version, he jots down:

“Are you sure the name was Morton?” Nancy asked quickly. “It couldn’t have been Mortimer?”

Ah. So now that Mortimer is changed to Martin, the name Martin couldn’t possibly be mistaken for the name Morton, could it? Well, actually it could! But apparently Morton was too old-fashioned, too, so now the passage reads:

“Are you sure the name was Mark?” Nancy asked quickly. “Could it have been Martin?”

I should mention that in the 70s update, Ned’s friends changed from Bill Cowan and Bud Mason to our old familiar chums Burt and Dave. That’s no mystery.

The real mystery is, why in the world was the golf caddy’s name changed from Sammy to Chris?

Oh, well, as Nancy tells the “ghost” scarecrow at the end:

“A million thanks for a very pleasant mystery!”

Oh, wait, that was updated, too!

“A million thanks for spooking me into a very puzzling mystery.”