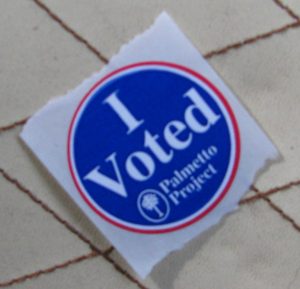 It’s election day. I voted. Did you?

It’s important, you know. Even the chums in the Nancy Drew Mystery Stories believe in the power of the vote. Why, here’s an example from The Crooked Banister:

All were convinced that if Rawley were in the house, he would do one of two things: hide from them or try to harm them, perhaps using the robot.

“I don’t think we should go in,” Bess stated flatly. “Let’s surround the house and wait for Rawley to come out.”

… After debating what to do, Ned suggested they take a vote as to whether they would enter the house or not. There were five votes for going inside, and only one for staying outdoors. That was Bess’s.

And so they enter the house. And in the end, they find an important clue. So majority rule was right.

And how did it turn out for Bess? Well, she and Dave are separated from the group. The robot escapes the closet where it has been locked and remotely opens the trap door on which Bess and Dave are standing. Of course, the tunnel in which they are trapped is covered with soundproofing and noone can hear their yells. So they follow the tunnel only to have not one, but two, doors close behind them, trapping them in a tower, where the only thing they can do is wait for Nancy and Ned to save them.

OK, so maybe that didn’t turn out too well for Bess. But at least she has the satisfaction of saying “I told you so.”

The important thing is to vote.