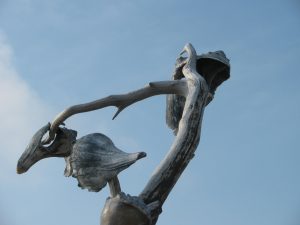 We learn about the freshwater mussels that were used in the local button factory. (A detail I remember all these years later.) We learn, of course, about the river clams that old sailor Mehearty digs and sells. And then, when Mehearty is tossing some freshly dug clams into a basket, there’s this…

As George caught the last one, she held it in her hand to examine it. The clam looked different from the others. The next instant she stared in astonishment at an ugly purple stain on her fingers. Her dress looked as if it had been splattered with dye.

“Goodness!” she exclaimed in dismay. “Where did that come from?”

Mehearty splashed over to the boat. He looked surprised when he saw George’s stained hands.

“That purple color is a dye,” he explained. “It came from this here whelk.” 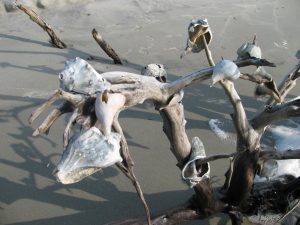 But I’m getting ahead of myself. In this mystery, Nancy and her chums are trying to locate Florianna Johnson, the heiress to Heath Castle, which is located right outside River Heights on the banks of the Muskoka River. At one point, the Heaths had built up quite a fortune — but now the castle is abandoned and overgrown.

This is a Nancy Drew mystery, so we’re used to reading about stolen jewels, and buried gold and coin collections. But just how did the Heaths amass their wealth? Let’s ask Mehearty.

“In the old days fortunes were made in whelk dye. Maybe the Heaths made part o’ theirs that way. Who knows?”

Ah, Mehearty might be onto something. Nancy soon finds a diary hidden by Walter Heath (Where? In a crumbling wall, of course).

Rapidly she skimmed through the small book. Many of the pages were blank, but under one date she came to an item important enough to read aloud.

“ ‘Stumbled upon something which may prove to be a treasure. Whelks are right on the shores of Heath Castle. They contain a beautiful magenta dye. Am mixing it with various chemicals. So far I’ve produced six shades of fast-color dye.’ “…

“I wonder what became of the dye?” the Drew girl mused, thumbing through the little book. “Mehearty said that in the old days magenta dye brought high prices. Dyed wool sold for more than two hundred dollars a pound.” 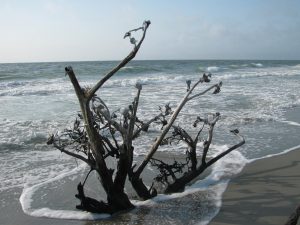 So there you have it — one of the most interesting “treasures” in all of the Nancy Drew Mystery Stories. Whelk dye.

But as it turns out, the bad guys have already found the bottles of “valuable whelk dye” hidden in the — yes — crumbling walls. And they have long since sold the dye and spent the money.

May I interrupt here to ask — just who would you sell bottles of whelk dye to? But I digress…

The situation looks very bleak for poor, destitute Florianna, without the valuable whelk dye to fall back on. Until Nancy has an idea! She asks Mehearty to take her back to the beach along the Heath estate.

“Lots of holes in the sand,” said Nancy. “Do you suppose—”

The old clam digger set to work with a will. As Nancy watched, he brought up shell after shell from beneath the wet surface.

Nancy wanted to dance for joy, but she controlled herself until Mehearty had dug up several dozen of the mollusks.

Nancy felt as if a great weight had been lifted from her shoulders. Now Florianna would have an income. She could keep Heath Castle and fix it up.

I guess I should add that Nancy also figures out a second source of income — the spring water in the gardens.

An analysis of the water on the property proved it to have unusually beneficial qualities, even curative effects in bone disorders. Arrangements were made with a bottling concern to market it.

Presently, with money pouring in from two sources, Florianna was given a free hand to establish the gardens at Heath Castle.

I only mention this special spring water because, in the revised 1973 version, that is the ONLY ongoing source of income for Florianna. There is no mention of the river whelks whatsoever. Sure, earlier in the book, Nancy finds old, discarded whelk shells in a garden pool, just as she does in my secondhand 1945 version. But in the revised version, these are transplanted seashore whelks that Walter Heath had conducted experiments on.

In the revised version, the bad guys do surrender the “Perfected Formula” that they found along with bottles of dried-up dye, but apparently it would be too expensive to start up a commercial whelk dye concern. And just what is this “Perfected Formula”? 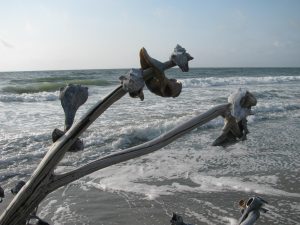 “Sea salt mixed with the spring water.” Um, don’t marine whelks live in saltwater? So, basically, this is the equivalent of pulling a whelk out of the ocean and pouring a bottle of spring water over it? But I digress again…

The discarded whelk shells Nancy found in the garden pool are still somewhat valuable and Nancy is able to sell them to a company in New York that specializes in making fine mother-of-pearl jewelry. What?

If you’re curious about the pictures that accompany this post, they are of an old dead tree on Debordieu Beach, where beachcombers used to hang whelk shells as they passed by. (I think I even hung one there myself last summer.) This summer, the tree was gone, washed away with the tide. Sad.