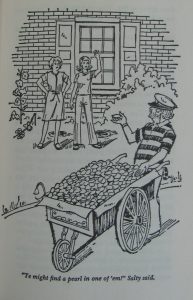 Quick, which Nancy Drew character sang this song in The Clue in the Crumbling Wall?

If you’re a diehard fan, you’ll know. But the name that you’ll come up with will depend on which version of the mystery you read: 1945 or 1973.

Here’s how the character was introduced in my secondhand 1945 version:

“Here comes old Mehearty down the street!” Nancy laughed, shaking off her somber mood. “Do you want any clams today?”

“I do not,” Mrs. Gruen said with emphasis. “But if I know Mehearty, he’ll probably talk me into buying some anyway!”

The old man, once a sailor, had received his nickname from Nancy when she was a little girl. He often addressed other people as “me hearties,” and sang nautical songs including these words. Little Nancy had gotten the whole thing mixed up and called him “Mehearty man.” Her nickname had stuck to him. Mehearty was a good-natured, lovable person, full of yarns of the sea. An injury on shipboard had kept him on land for many years. He dug clams in the near-by river and sold them for a living.

The man’s cart bell tinkled merrily, and a moment later the jolly, weather-beaten old fellow rounded the corner of the driveway, wheeling his little wagon…

“Real cheap today,” he coaxed. “Ye can’t turn down my clams, me hearties.”

As well as I can remember, Mehearty was only in this one book. But his name has stuck with me all these years. (Much like Mortimer Bartescue in The Haunted Bridge.) So imagine my surprise when I recently picked up the 1973 version and found out that Mehearty had been given a completely different name.

He is still wheeling his cart and chanting the same bad poetry. And he still addresses everyone as “Ye,” because, well, how else would we know he was an old sailor if he didn’t say “ye”? But the rest of the 1973 introduction is very… seventies — a decade where silliness abounded in pop culture. (1979 was the year that Scrappy Doo was introduced. Need I say more?)

The good-natured, elderly man, once a sailor, had received his nickname from Nancy when she was a little girl. He had introduced himself to the Drew household as Boatswain Bostwick Bumpleton “home from the salty seas.”

Nancy had tried to say his whole name but sometimes mixed it up. Once she addressed him as Bumple Boat and another time as Humpty Dumpty Bumpleton, much to his amusement. Finally the little girl settled on Salty and her nickname stuck to him.

The rest of Mehearty’s rhymes sound very 70s, too. But believe it or not, they’re original to the 1945 version.

Mehearty might have been a “lovable person,” but at least one person wasn’t a very big fan. As you’ll notice in the passage above, Hannah Gruen displayed a certain amount of disdain for the man. Later in the book, she adds this:

“Why I keep buying that man’s clams I don’t know,” she muttered. “No telling where he gets them–certainly not from a protected bed. I wouldn’t risk eating one of them raw.”

That line was taken out of the 1973 version, thank goodness. I’ve spoken before about how revising older texts can take out some of the charm. But taking out references to bad shellfish? That’s one revision I can get on board with.