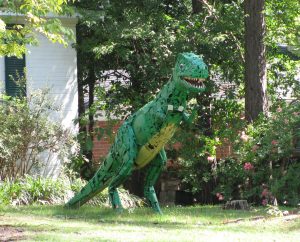 So I was driving through the neighborhood and suddenly I thought I saw the Lizard Man. It was tall, and green and …

What’s that? You don’t know the story of the Lizard Man?

Well, back in the summer of 1988, a giant green Lizard Man terrorized Lee County, South Carolina. Or so the story goes. It all started one night when a young man stopped to change a tire by a butterbean field and said a red-eyed, green-skinned Lizard Man started chasing him at speeds up to 35 mph.

I remember that summer well. It was obviously a very slow summer, because stories about the Lizard Man dominated the local news. The international press even took interest. People camped out in Scape Ore Swamp, sold Lizard Man t-shirts and wrote Lizard Man songs.

Years later, I myself even wrote a book based (very loosely) on the story: The Lizard Man of Crabtree County.

The real Lizard Man was never captured, and the story just faded away at the end of that summer. But every now and then, the story pops up again. In fact, there were a couple of “sightings” just last year.

This is all just a long way of saying that we are used to seeing strange things in South Carolina. In fact, we kind of expect it. So I thought I was onto something when I saw this big green fellow in my neighborhood.

Turns out, it wasn’t the Lizard Man. It was just a dinosaur statue. In someone’s front yard. In the suburbs.

Nothing strange at all.