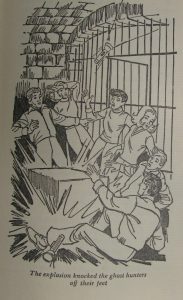 So I’m reading along in The Invisible Intruder, about a summer ghost-hunting trip that Nancy Drew and her friends take, and come to this passage:

Finally all of them went out to the stone parapet in front of the inn.

Some of the group sat in chairs, others on the ground, while still others, including Nancy, seated themselves on the wall near the edge. There was a lively exchange of banter followed by speculations about the mystery.

About an hour later they were startled to hear a whistling sound overhead. Looking up, the ghost hunters were amazed to see a bursting display of fireworks.

Almost immediately this was followed by a barrage of flaming rockets which came directly toward the watchers. Before Nancy could move, one of the rockets hit her arm and she cried out in pain.

Well, that came out of nowhere! Oh, sure, the group has already been attacked by a man blowing air at them with huge bellows, a giant motorized octopus, a fortuneteller in a trance, a hand reaching into their motel room, an apparition formed by potentially harmful gas, a tabby cat, and some garden variety thugs … but I was not expecting explosives.

But now it’s starting to make sense that nine chapters earlier, Bess was very worried when the girls found a box in the backseat of Nancy’s car.

The girls stepped out of the car and Nancy picked up the box. “It’s pretty heavy,” she said. I wonder what’s in it.”

Suddenly a frightening idea came to Bess. “Nancy, put it down! Don’t open it! There might be a bomb inside!”

Gingerly Nancy set the mysterious box in the driveway of the motel … Keeping at what she considered a safe distance, Nancy gently pried up the lid. It fell to one side.

The three girls burst into laughter. The box was full of papers.

Oh, Bess. There had been no sign of explosives up until this point, but, well, she’s a friend of Nancy Drew and apparently had a feeling that something would go boom by book’s end. And what happens a mere six pages after the fireworks? The group is exploring the dungeon of the same inn/fortress and come across a trap door.

Suddenly the wood came loose. Then boom! There was an explosion from underneath.

It knocked the ghost hunters off their feet. They lay sprawled on the floor, all of them in a state of shock.

So…Bess doesn’t look so crazy now, does she? Well, maybe crazy like a fox.

If you’re celebrating with fireworks this upcoming holiday weekend, please be safe. And have a wonderful 4th of July!