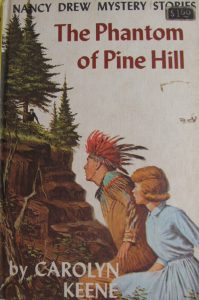 It’s June – time again for June Week at Emerson College! Nancy Drew and her chums Bess and George have been invited to Emerson by their “special friends” Ned, Burt and Dave. After a motel mix-up, the girls end up at “Uncle John” Rorick’s Pine Hill mansion for the week. And what a week it is, with a river pageant, fraternity parties and dancing.

In other words, plenty of wardrobe changes.

Nancy Drew’s wardrobe is as legendary as she is. She wears dresses, yes. But what kind of dresses? As a young reader, I learned fabulous new words like sheath, frock and shift.

Nancy attends two big dances, and her clothing choices do not disappoint. First, Nancy wears “a yellow linen formal, embroidered in white with birds and flowers. It was a one-piece dress with a slightly full skirt.” And for the Omega dinner dance, Nancy chose “a pale-green two-piece with a slightly full skirt. It was quite plain except for an intriguing geometric design in brilliant colors embroidered on one side of the sleeveless blouse. The trimming reached from the shoulders to the waistline.”

When clothing choices go right in Nancy’s world, the results are spectacular. But in The Phantom of Pine Hill, the wardrobe mishaps are much more memorable – not only for the sheer number of them, but also because they uncharacteristically happen to the boys.

We’ll skip right over the first party where pink lemonade is spilled on Nancy and she goes back to Pine Hill to change from a white dress to a flowered print. No, that incident is tame in comparison to the wardrobe mishaps that follow.

Wardrobe Mishap #1
Nancy, in “simple but attractive sports clothes,” goes for a canoe ride with Ned and they capsize (there’s that word again!) So they walk to Pine Hill and Nancy looks on amused as Mrs. Holman, the housekeeper, finds clothes for Ned.

She tried hard to keep from smiling as she looked at Ned. Mr. Rorick certainly went in for vivid sports clothes! She knew that Ned would be the victim of a lot of teasing when he reached the fraternity house, so she refrained from any of her own.

Wardrobe Mishap #2
After the pageant, Ned and his friends, dressed as Indians, spirit Nancy off to dig for treasure—on a hot June day.

He and his friends were a sorry-looking sight. They were hot, dirty, and tired. Dust and mud had spattered on their grease-painted bodies and those who had not removed their wigs were now wearing them askew. Nancy found it hard to keep from laughing.

Once again, Nancy and Ned walk to Pine Hill, and the housekeeper suggests that Ned change.

He laughed. “If I keep this up, poor Uncle John won’t have any clothes left!”

He went upstairs, took a shower, and a little while later appeared in clothes which Uncle John evidently wore when he was working in the garden.

It’s Dave’s turn for a wardrobe mishap – finally justifying his presence in the story, as he falls headfirst into a chimney.

What a sight he was—completely blackened with soot! But Dave seemed unhurt as he perched on the edge of the chimney.

“You sure you’re all right?” Bess asked solicitously.

“Sure,” said Dave. “But give me first prize for being the stupidest guy in Emerson!”

Inside, Bess asks if she can put Dave’s sooty clothes through the washing machine and the dryer. Now, in most worlds, there wouldn’t be much more to say. But this is Nancy Drew’s world, where housekeepers take their jobs very seriously.

“Yes, indeed,” said Mrs. Holman. “I’ll go down to the basement with you and show you how they work. Afterward, I’ll press the suit for you.”

I now want a fabulous yellow frock for June Week. And a housekeeper.