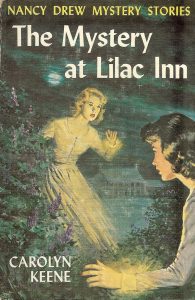 I wrote before about Nancy Drew inspiring me to write. And in many ways, she also taught me how to write.

For instance, through the Nancy Drew books, I learned lots of new words. In The Mystery at Lilac Inn, the story begins with Nancy canoeing down the river towards the inn. She runs into a submerged object and the canoe overturns. That was the first time I saw the word “capsized.”

Of all the new words and phrases I learned, there were three in particular that I absorbed naturally and couldn’t help but incorporate into my own writing. Unfortunately, I later had to learn how to UN-incorporate them from my own writing, as I used “ruefully,” “fairly flew” and “to her chagrin” much more than your average elementary school student.

These Top Three Nancy Drew-isms can be used at any time, but are particularly useful in the following scenarios.

In situations that are frightening

Nancy felt as though she were frozen in her seat. How closely she had escaped possible death! When she was breathing normally again, Nancy ruefully surveyed the tree which blocked the road. What was she to do?
The Bungalow Mystery, p. 38

In situations that are not-so-frightening

When they reached the garage, the girls were overjoyed to find the convertible ready. “Looks almost as good as new!” Nancy said, pleased. “I’ll write a check for the amount.”
To her chagrin, she had forgotten her checkbook.
The Clue in the Diary, p. 44

When you need to get downstairs quickly

On a hunch, Nancy pulled out several bureau drawers. There was nothing in them!
“They’ve gone!” she thought in dismay. “No telling what they took with them!”
Nancy fairly flew to the first floor and burst into the kitchen.
The Sign of the Twisted Candles, p. 108

Nancy fairly flew to the first floor, hoping that the trooper had some news of Roger Hoelt and his wife. Perhaps they had been apprehended! Mrs. Glick introduced her to the officer, a freckle-faced, outdoor-type man.
The Witch Tree Symbol, p. 96

When your clothing is in danger. Or merely inappropriate.

Her worst fears aroused, she fairly flew, heedless of the brambles that tore at her dress.
The Clue of the Leaning Chimney, p. 44

Mr. Drew wound among the many streets leading down to the Muskoka River, then took the vehicular bridge across. He turned toward the construction area and presently parked his car. As he and Nancy stepped from the sedan, he looked ruefully at her pumps.
“It’s going to be rough walking down to the waterfront,” he said. “Perhaps you had better wait here.”
The Hidden Staircase, p. 17

And … when you have worn gloves to protect yourself from a raptor’s talons, but have forgotten about its vicious beak